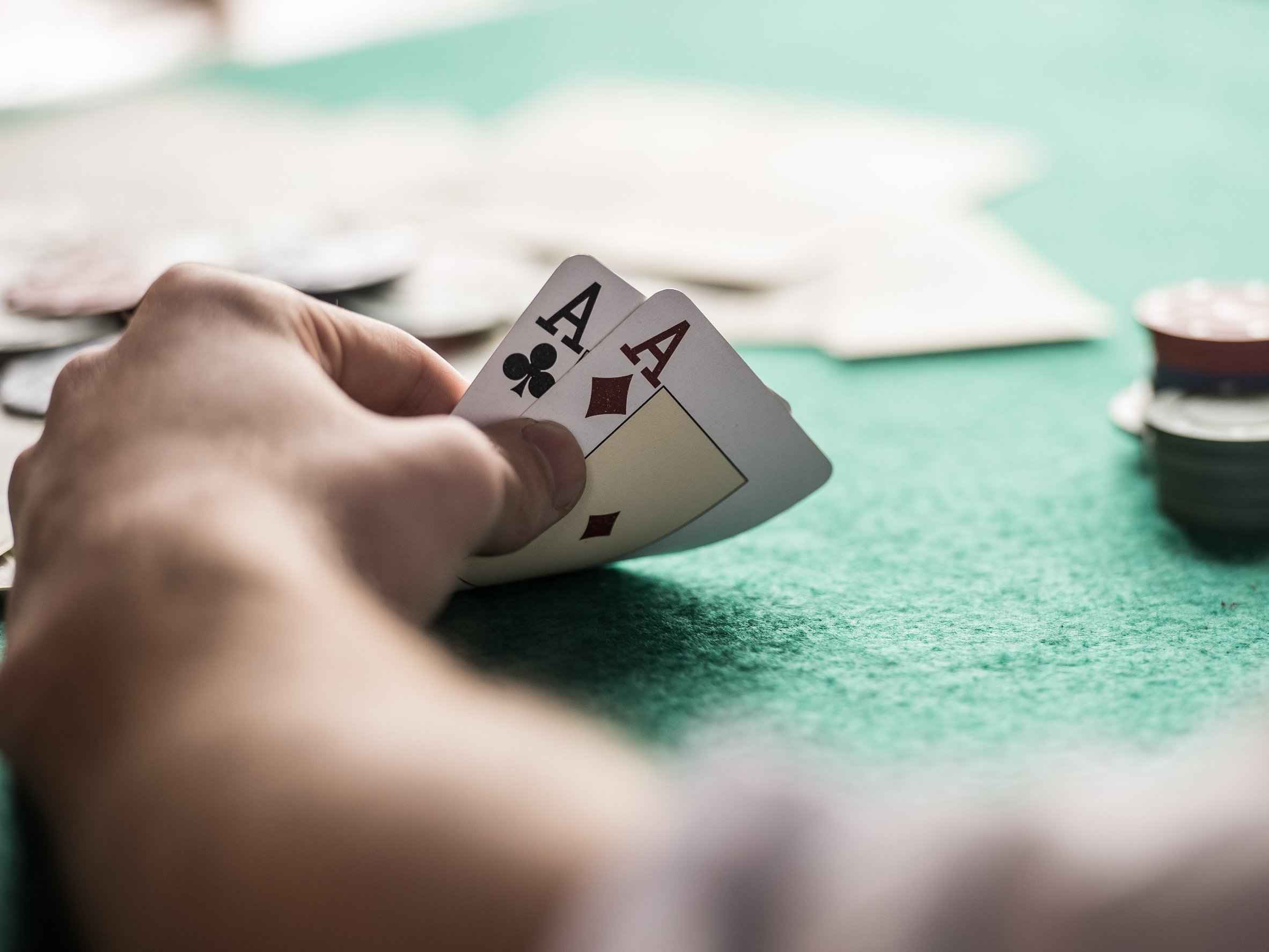 Bluffing is when you bet or raise to force your opponent to fold a better hand. If your opponent folds, you will automatically win the pot no matter what card you have in your hand. In poker, you have two options for winning the pot: having the best hand or successfully bluffing.

Bluffing is best learned by grasping the relationship between players’ ranges and the value-bet-to-bluff ratio.

Fortunately, bluffing is a simple skill that can be learned by following the three rules of efficient bluffing and studying some GTO (Game Theory Optimal) solver solutions.

Even though bluffing is easy to learn, it is challenging to master!

In this article, we’ll go over everything you need to know about bluffing to get you started on your path to becoming a master of poker bluffs!

Every Player is a Bluffer!

The majority of bluffs seen or heard about are large river bluffs, but buffing comes in all shapes and sizes.

Although we don’t usually think of it this way, bluffing begins with preflop raises, even when first in the pot. The typical opening range will include strong hands like aces but also marginal hands like 67s or 9To, depending on where we are seated around the table (if you aren’t already using a guide when entering the pot first, check out our free preflop ranges).

Did we just bluff if we raised our hands like 67 and stole the blinds?

With better raw equity, opponents would have folded hands. Some may have even had us dominated, for example, when they folded Q6.

Following that, we’ll frequently miss the flop and have to decide whether or not to c-bet. This is where the line between competent and inept players is drawn.

Competent players always consider the range of possible hands. This allows them to play far better than a player who is still focused solely on the two-hole cards in front of them.

Players can also devise (or may even have memorized) an effective flop strategy by considering their range of hands. They divide their range between hands they want to check and c-bet. If multiple bet sizes appear preferable for the situation, the size to bet or sizes.

With multiple cards to come and plenty of decision points remaining after the flop, we can be more liberal with our betting and include some more marginal hands. So we’ll be betting higher equity hands for value, lower equity hands as a bluff or semi-bluff, and possibly some more merged hands to keep things interesting. All of this will, of course, depend on the flop texture, but this is the general process.

Regarding the turn, we generally bet a 2:1 ratio of bluff bets to value bets on the flop to leave ourselves with enough strategic options.

In turn, this will change to a 1:1 ratio. Finally, a 2:1 ratio of value bets to bluffs is used by the river, but this is entirely dependent on river bet sizing.

By planning the hand in this manner, we are able to arrive at the river with the proper hand balance. As a result, you can avoid what many players do: having a vulnerable, overly strong, or weak range. Players will be vulnerable in the sense that they will be able to quickly assess the situation and make clearly profitable decisions.

Consider our range ratio, and you’ll notice we’ve created a kind of break-even scenario for our opponent. A value-to-bluff ratio of two to one. As a result, our opponent must win the pot one out of every three times (presumably the time we are bluffing).

In reality, given all of the variables and the game’s complexities, things rarely go exactly as planned in the heat of battle. Furthermore, we must consider the players’ ranges and the board texture, making determining the best frequencies to bet difficult.

Consider the number of value hands you have to bet as a rule of thumb. Counting combinations is a good way to do this and is very simple once you get the hang of it – here’s a tutorial for those who aren’t familiar with it.

If you decide you have 30-40 value betting hands, you can go for 15-20 bluffing combinations because this adheres to the 2:1 value-bet-to-bluff ratio. However, you would adjust this based on your bet size and possibly any exploitative considerations.

Don’t worry if you’re new to this concept because it’s not an exact science. Furthermore, it becomes fairly automatic once you adopt the correct thought process throughout the hand.

Because of the three rules of efficient bluffing, the types of hands to bluff bet with will frequently stand out.

Fortunately, when it comes to choosing which hands to bluff with, the three rules of efficient bluffing make the process relatively simple!

This section discusses the aftermath of a poker hand in which one player bluffed and the other player called, catching them bluffing. After reaching a showdown, there are always things you can learn and adjust for future play. We’ll look at (a) when you catch someone bluffing and (b) when someone else catches your bluffing.

When Your Bluff Is Called:

Was your opponent’s call weaker than expected? Did your betting story make sense in retrospect? Did you bluff with an appropriate hand in your range? Mistakes can be costly in poker, but as long as you learn from them and apply what you’ve learned in future situations, it’s not all for naught.

How to Identify Someone’s Bluff

In general, especially for physical tells, there are a few underlying concepts to grasp that will help you determine whether your opponent has a strong hand or is bluffing.

If a player tries to intimidate you with confidence in their posture (i.e., sitting straight up and staring at you in the eyes), this usually means weakness. They’re attempting to “appear” strong so that their opponent is too afraid to call. The same principle also applies in the opposite direction.

Recognizing whether their body position is still or relaxed is another common tell for body language. If someone appears to be at ease (deep breaths, swinging feet, swiveling in a chair, casual movements), they are probably at ease with their hand and value betting. Due to the nervousness associated with bluffing, humans frequently default to the fight, flight, or freeze response (which translates to a “freeze” in poker). If you notice tension in your opponent’s frozen position after they bet, they may be bluffing.

While relying on tells can help you make better decisions, it should not be your primary decision point when deciding whether to call, fold, or raise. Rather, it should be used to supplement the information you’ve already gleaned from the hand.

Furthermore, if you notice a tell, don’t become overly reliant on it. It is possible that it happened by chance the first time, and it is not guaranteed that it will happen again.

That being said, here’s a comprehensive list of tells that can help you determine if someone is bluffing in poker.

Movement of The Eyes

Have you ever wondered why some players wear sunglasses at the table? Because your eyes can be extremely telling about the strength of your hand (as the next 5 tells will illustrate). You can begin to gain some insight into which parts of the brain are being used and accessed when someone is thinking based on where their gaze is located or where their eyes frequently shift to.

A common model, for example, states that if someone looks to the left or up and to the left, it indicates that the individual is relying on fabricated, made-up information from a visual or auditory standpoint. (In other words, they could be playing a game.)

Where They Look After Cards Are Dealt

If your opponent continues to stare at the board after the community cards have been dealt, it is likely that they did not help his hand. Alternatively, if he looks away almost immediately (trying to appear disinterested subconsciously), he’s likely to have connected well.

Seeing someone look at his chip stack is an involuntary reaction caused by a desire to bet immediately when they make a strong poker hand. Looking at another’s chip stack before betting can also be a sign of strength, as they enter “predator” mode and plan to win all of their opponent’s chips.

As previously stated, lying causes stress. Because of the stress, the body requires more oxygen to function, resulting in heavier and/or faster breathing. If you notice someone swallowing hard after betting, it is usually an indication of nervousness and could be a bluff.

Don’t mix up confident body positions with the “intimidation factor” mentioned above in the section on “Eye Gaze.” Someone with a large hand is likely to be relaxed and confident (i.e., with steepled fingers). If they’re seated in an unconfident manner (for example, with interlocked fingers), they could be bluffing!

If your opponent slides his bet out into the middle of the pot, he probably has a good hand. If your opponent places his bet forcefully and uncaringly, he’s likely bluffing and trying to project overconfidence and intimidation on others. Similarly, the chip denomination he uses when betting, as well as how he arranges his bet, may give away information about the strength of his hand.

Timing: The amount of time your opponent takes before betting depends on whether he has a good hand or a bluff. This will most likely vary from player to player but look for patterns that indicate whether someone is bluffing or betting and use this to your advantage.

Sizing: When some people bluff, they bet more than when they value bet. Others make very small bluffs. Again, this tell will be very player-dependent, but looking for consistent patterns can help you decide whether to call or not.

Bluffing is an important aspect of any poker player’s game. When executed correctly, it can not only help you win more money, but it can also turn you into an extremely difficult player to play against, as your opponents will simply have to guess whether you have the goods or an air ball.

Continue studying the concepts and principles of bluffing long after this article has ended. It’s the repetition of these ideas that will really help cement the key points of bluffing into your brain, taking your gameplay to a whole new level when you’re able to apply it while playing.

Best of luck with the felts!

Where to play online poker?