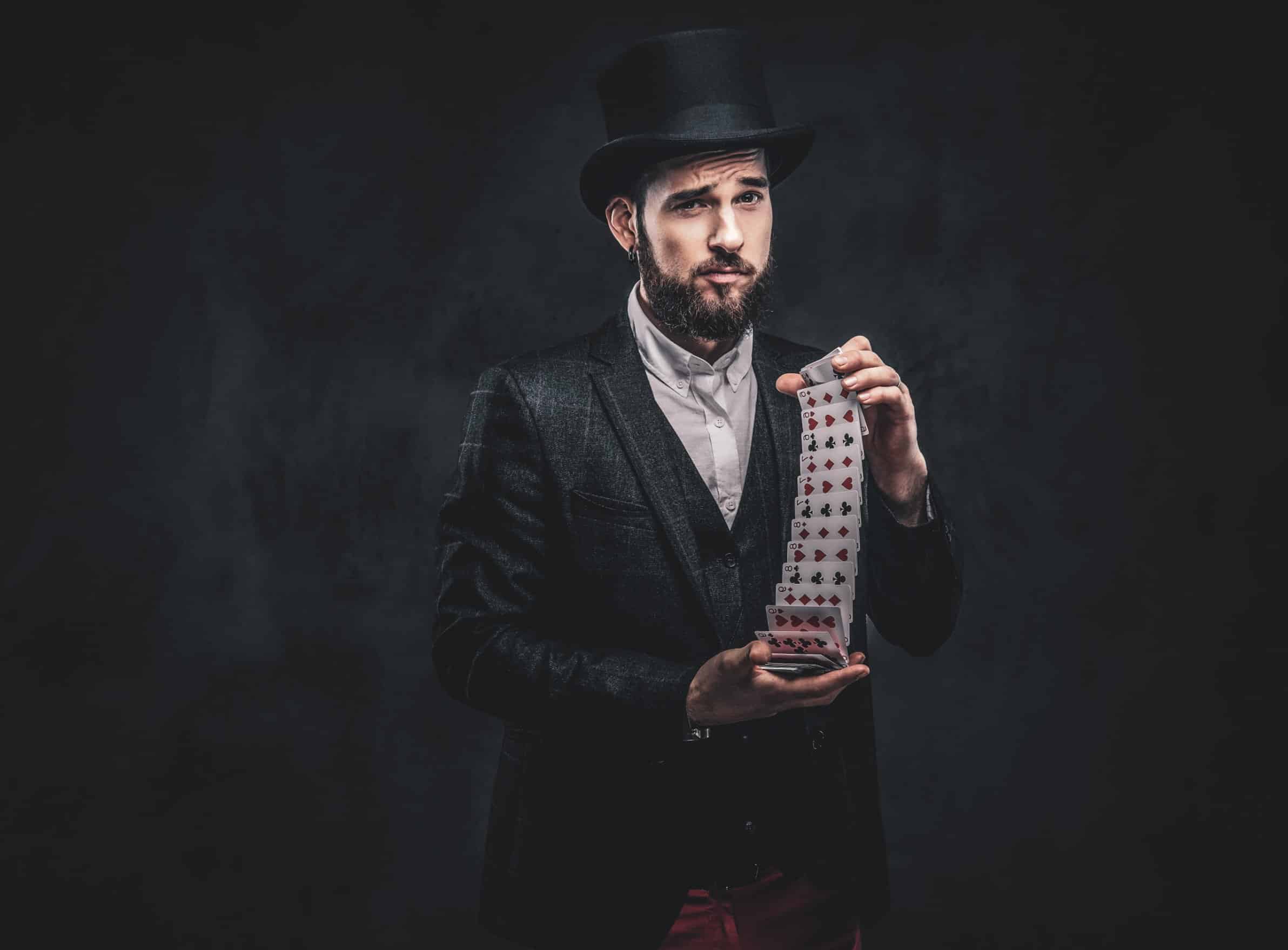 Poker is a hugely popular game to play both online and in person, with millions of players worldwide. While it’s important to understand the rules of the game before getting started, it’s also a lot of fun to learn interesting facts about it! Poker has a lot of fascinating stories to tell, and trivia tidbits abound as part of our history, pop culture, and more. Continue reading to learn the fascinating facts about poker.

Although poker is best known for its origins in the American Old West, it actually began hundreds of years before that and outside of the United States. Historians believe poker originated in 10th century China or in the 16th century from a Persian game called nas. Whatever it was, a version of it became popular in France and was then introduced to Canada and then the United States, where it became popular. It is now played in various forms all over the world and is extremely popular in the United Kingdom.

#2 Poker was once played with only 20 cards.

Early poker games were not played with the standard 52-card deck we use today; in fact, that deck was invented in the mid-nineteenth century to accommodate more players. Instead, people who played poker began with a 20-card deck, according to several authors of mid-nineteenth-century books. This required bets to be placed in a limited combination range, with four players each receiving five cards.

#3 Poker has been featured in hundreds of films

Poker has been featured in hundreds of motion pictures, ranging from Westerns like “Maverick,” set in the American Old West and starring James Garner, to “The Gambler,” starring Kenny Rogers, and the James Bond film “Casino Royale,” starring Daniel Craig. This dynamic game has added drama to a single scene or an entire film, enriching our entertainment for future generations. On YouTube, see how a high-stakes poker scene added dramatic tension to “Casino Royale.”

Most of us play poker for low to medium stakes, but Cirque Du Soleil CEO Guy Laliberte decided to go big when he proposed a $1 million buy-in tournament in 2012. At first glance, it appeared to be folly, but 48 players competed in this dramatic tournament at the Rio Casino in Las Vegas, Nevada, with the winner, “The Magician” Antonio Esfandiari, taking home a record $18,346,673 in winnings.

#5 There is a world series of poker

When the World Series of Poker was first held in 1970 in Las Vegas, Nevada, it transformed poker from a parlor game to a knock-down competition. Although there were few participants or press coverage in the first year, the series grew in popularity and participation over time. The World Series of Poker is now mainstream, a corporate-sponsored event that ESPN covers.

#6 Groucho Marx got his name from poker

During a poker game in 1915, Art Fisher gave the four Marx brothers all nicknames that ended in “o.” It’s unclear whether Groucho was named after his grouch bag (small money purse) or because he could be a bit moody. But if it hadn’t been for that poker game, he’d be known by his given name, Julius, rather than Groucho—a far less amusing name.

#7 The longest poker game ever played

Anyone who has participated in a slow-structured tournament knows how tedious poker can be at times.

Nothing, however, compares to the game played at The Bird Cage Theatre in Arizona.

This game began in 1881 and continued continuously until 1889!

Around $10 million was exchanged across the table during the game, including some famous faces such as George Hearst and Diamond Jim Brady.

In poker, there is a hand known as the “Dead Man’s Hand.”

When you have two aces and two eights in poker, you have a Dead Man’s Hand because those are the exact cards that a well-known poker player, Wild Bill Hickok, had when he was shot dead by John McCall.

#9 Poker may have begun in China

Despite the fact that the exact origins of what many consider to be the world’s oldest card game are unknown, poker has been around for centuries. Historians trace it back to 10th century China, where it evolved from an early form of dominoes. It is thought to have spread westward from there, eventually reaching Europe and America.

Poker was first mentioned in a German book called “The Game of Cards,” which was published in 1696. In the early 1800s, the game made its way to the United States, quickly gaining popularity. The Chinese domino game is also thought to have influenced the evolution of poker.

Poker has evolved and changed over time to become the game we know today. While the fundamentals remain the same, you can play poker in a variety of ways.

Many famous people have been known to play the occasional game of poker, and many have gone on to have successful second careers as a result. Believe it or not, some politicians have made a lot of money this way as well. One particularly successful U.S. President at the table was Richard Nixon, who allegedly used his poker winnings to fund his political career in the mid-1940s.

Today, the majority of poker games use a standard deck of cards. A standard 52-card deck is used in games such as Texas Hold’em or Omaha.

Some variants do not use a full deck of cards, such as short deck poker, which uses only 32 cards.

According to history, the game was originally played with only 20 cards and a maximum of four players per game.

According to historians, it wasn’t until the 1830s that the game shifted to what we now consider standard 52 cards.

#12 The largest online hand ever played

The hand was played 12 years ago, and despite the passage of time, it remains the largest hand ever played in an online cash game to this day.

The hand was played between two fierce and hyper-aggressive Scandinavian players, Viktor “Isildur1” Blom to the left and Patrik Antonious to the right. In 2009, it was played at Full Tilt Poker, with players betting $500/$1,000 Pot-Limit Omaha.

It all started with some intense preflop raising, which saw the pot grow to a whopping $160,000 before the flop was even dealt. The fireworks went off when 4s, 5c, and 2h appeared on the flop.

Of course, Viktor called off his remaining stack. Patrik had flopped a straight and an overpair, whereas Viktor had flopped an open-ended straight with 6-7-8-9. Blom would have the better hand with a 3, 6, 7, or 8, winning the pot.

However, both the turn and the river bricked, meaning Patriks’ flopped straight was good enough to win this massive pot worth $1,356,946.50.

Even though we’ve seen some genuine nosebleed poker online, none of the pots played there can compete with the largest pot ever recorded in a live cash game. When all was said and done, and the dust had settled, the winner took home a pot worth slightly less than $2,5 million.

Dwan stood up and left the table after Paul’s aces scooped this massive pot.

The first online poker hand was played in 1998, marking the beginning of what is now a multibillion-dollar industry that spans the globe.

Before 1998, online poker was already available, but the game was buggy at best, and none of the games at the time involved anything other than playing money.

The website “Planet Poker” was the first to officially offer real money poker online, kicking off this crazy business.

It is quite common to see players at the table dabbling in prop bets, also known as side bets, during live tournaments and cash games. These are mostly for entertainment and to pass the time, but sometimes the players go too far. Here are some of these fun poker facts about weight loss.

Ted Forrester and Mike Matusow have made this wager twice. The first time, they bet $100,000 on Mike, losing 60 pounds prior to the start of the WSOP 2008. Matusow was successful in losing weight and thus winning the bet.

However, the roles were reversed two years later, in 2010, and this time it was Forrest’s turn to lose weight, 48 pounds to be exact, to drop down to a mere 140 pounds. He pulled it off and walked away with $2 million.

The Staples brothers won $150,000 from Bill Perkins, who challenged the brothers to a weight battle at the end of the year in which both had to weigh in at the same weight.

We should mention that Jamie weighed 304 pounds at the time, while Matt weighed 134 pounds. They won by Jamie losing 115 pounds and Matt gaining 54 pounds. As a result, they both weighed 188 pounds, winning the 50:1 bet Bill had offered.

Although its exact origins are unknown, poker is said to have evolved over the centuries through various games such as domino and ranked card combinations. In the year 969 A.D., Emperor Mu-Tsung was said to have spent New Year’s Eve with his wife playing “domino cards.” Regardless of its domino-like origins, bluffing has always been and continues to be central to the game.

#16 The first televised poker game was broadcast in 1973

Prior to the 1970s, although poker was widely played, it had not gained popularity among television audiences. But that all changed as the World Series of Poker gained popularity following its debut in 1970. The dramatic competition was broadcast on national television for the first time when CBS Sports covered it in 1973. It was the first of many broadcasts, and televised poker is now a popular sport on ESPN.

#17 Ivory, wood, clay, and bone were used to make the first poker chips

Poker players used to bet with gold bars, nuggets, and even gold dust before poker chips became popular. It soon became quite impossible to assign value to the rounds being played, and so the need for a poker currency was seen. At the time, the gaming houses decided to make bone, wood, ivory, and clay chips to represent various values. Poker players could exchange their money and gold for chips in the same way that they do today.

The World Series of Poker (WSOP) is the most prestigious poker tournament in the world. It is also the most popular, attracting thousands of players from all over the world.

The WSOP includes a variety of events, the main one being the No-Limit Texas Hold’em tournament. This is the most popular tournament, and the winner receives a multimillion-dollar cash prize.

Another major poker tournament series is the World Poker Tour (WPT). The World Poker Tour hosts events all over the world, with the main event being a No-Limit Texas Hold’em tournament. The WPT, like the WSOP, attracts thousands of players and offers a multimillion-dollar cash prize.

The first of our important poker facts is probably the most important day of online poker since the boom of poker after Chris Moneymakers’ incredible win in the WSOP in 2003, after winning the entry to it through a $39 qualifier.

As a result, PokerStars and Full Tilt stopped offering real money games to their customers.

After some back and forth, the government finally agreed to release the companies’ accounts, so they could refund their players.

Have you ever heard of these poker facts? You may have heard some, but I’m sure you haven’t heard them all! Share them with your friends if you find any of them interesting.

Top Poker Tournaments To Watch For in 2022 

How to Deal Poker: Beginners Guide for 2022